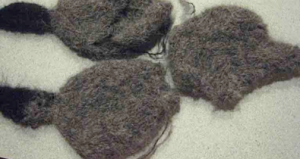 Months ago, well for my birthday, Elsie gave me the KnitPicks Roxy the Fox and her Cubs kit.  I made up one of the fox pups, which was adorable.  Caleb was really impressed but thought I should make a WOLF, not a FOX.  He did not buy into a wolf being red and white for some reason…

Anyway, he talked me into knitting him a wolf.  When Eldon heard that I was going to knit a wolf for Caleb, he asked for one, too, so I said I would accommodate.    Since May I have been working a few rows every so often, but nearly every time I see Caleb he asks if I have finished his wolf.  I told him I might have it done by Christmas.

Well, yesterday when I was at his house he asked again about the wolf and I asked him if he thought I should take it to Elsie’s house to knit on.  You can imagine how happy that made him.

This morning I was watch Caleb and Leah while Alissa and Eldon went to kindergarten open house.  I brought out the wolf to see what I could do on it.  My thought was that Caleb and Leah would be easy to deal with so I could get out the pattern and work it without making very many errors.

It turns out that they were lambs, though Leah did the same climb-the-stairs routine today that she did yesterday and when I brought her downstairs the second time she started to cry.  Thinking I could calm her by giving her water, I took her to the kitchen.  She was very happy to have a drink.  We then went into family room where Caleb was watching a care bears show and sat down in the rocker.  Leah was watching for a couple of minutes then snuggled in comfortably in my lap. I was so pleased she felt comfortable sitting in my lap.  Very shortly I felt as if I had dead weight in my lap.  When I asked Caleb if Leah was asleep, he leaned forward in his little blue rocker and said, “Yep!”  I took her upstairs and deposited her carefully in her crib without waking her.  I guess I will now assume that Leah trips upstairs means she wants to nap.

While with Caleb I finished knitting the second wolf body and when I came home I started the first wolf head.  The head did not turn out well at all–the fox has two colors which helps keep the pattern straight.  With all gray for the wolf,  not!  I may use black with the gray for the second head.

In between the children this morning and working on the wolves tonight I had a long day…starting with helping Peter at the computer at the Senior Center….though that turned out not to be successful as there were printer problems, and since I am not an administrator there I could not add the proper printer drivers.  Peter suggested I do the printing at home.

Price Chopper for some Chobani Greek yogurt and a salad, then to Credit Union then to BirdSeed Quilts–no, that is not the name, but I did buy a beautiful quilt for the Graco bed for when James comes to visit next week. I did not think a full sized quilt or blanket would work very well there!

The wheat had sprouted well so I made some sprouted wheat bread (which turned out pretty yummy) plus got some “raw sprouted wheat bread” [which we saw on YouTube a couple nights ago] mixed up and put into the dehydrator along with three trays of blueberries,  If it is any good we will eat that bread with peanut butter for breakfast…