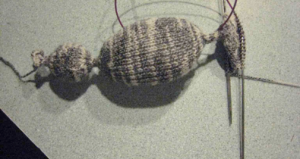 Yesterday was Knitting at Elsie’s Day, my regular Thursday afternoon adventure.  It is so lovely to go to her home, feel so welcomed and sit and knit and talk.

The whole day had been busy, starting with swimming at the Aqua Center then watching the grandkids for a bit while Mom went to a meeting to plan the Primary program.  Eldon was sick and napping on the couch when I arrived around 9:30–napping being totally unheard of for that boy.  He has not napped in years.  Anyway, sometime after his mom left he started reporting a bad belly.  Eventually he made a mad dash to the bathroom, but did not make it in time.  Poor little creature.  Caleb gave me some newsy bits on what it is like to have “throw up problems”!  So funny to hear that little three-year-old giving this news report.    Leah kept climbing the stairs so the third time I put her in her crib and she immediately went to sleep.  Maybe I should assume she WANTS a nap, and go up with her when she heads that way…

On the way to care for the little ones I had stopped at Joann to get some white crochet thread to begin an insertion for my temple dress which is about 4 inches to short.  I am making the insertion about 8 inches wide and will crochet until I cannot stand it anymore, at least four and a half yards, then will wash it in the washing machine to see if I can shrink it down a good deal.  As long as it is long enough to insert, I will make the width work.  At least I think so!

While knitting and visiting, I told Elsie I was concerned about how to figure dimensions for a sweater when you change the yarn and needles, thus changing the gauge.  She found me a great article on how to figure percentages from a Knitting magazine some years old.  That makes me more confident that I can successfully complete Megan’s vest.

During the Elsie knitting, I worked more on the Elephant, finishing the first leg and beginning the second leg—the photo accompanying this entry.  So much fun.  The yarn is Regia Stretch cotton. I have a good mind to get another ball and actually make some socks out of it. It knits up very easily and is comfortable on my hands.

Sharon asked me if I was on Facebook.  When I said yes, she had Cameron go to Elsie’s computer so she could “friend” me.  When I arrived home I confirmed her friend request.  It is so nice to have so many “friends” on Facebook.  One can learn a lot of stuff that way…!

What a day!  Up early to do a few jobs around home then left early to get to the Dorr Mill Store in Guild, NH for a braided rug class with Sandy Luckury at 10 AM.  Despite the rain, wet roads, and a quick stop at the credit union, I made it to Guild with time for a brief  personal “rest stop” and glance around the store before class began.  Sandy L., class member Sandy, Camille, and I were the only braiders there today.

There is so much to learn about Barbara Fisher’s braided rug method.  In a previous class two weeks ago I had learned to braid and worked two 15-inch braids with sample wool to be used for “butting” practice eventually. At that time I purchased three yards of gorgeous wool–deep red, navy, and a gray herringbone–to go along with some wonderful gold that Aunt Freda had given me a few weeks ago. Sandy had instructed me to start the braid with the colors that I wanted for the center of the rug then contact her with the number of repeats per 12 inches.  Because this wool is blanket weight there were only 7 repeats and the braids were a full inch wide rather than the regular 9 repeats and three-quarter inch braids with the standard braiding wool.

The first thing Sandy L had me do was to prepare a color plan for the rug by snipping many very small pieces of the five fabrics and putting them together in sets of three which correspond with each round of the pattern.  Rather than do a hit-or-miss rug I am doing a patterned rug that will be approximately 2 feet by 3 feet.

I had planned to make stair treads for our beautiful new stairs but Bob rejected that idea.  Probably a great blessing as it would have cost a great deal of money and even more work to make treads for each stair in the addition.  Thank you, Bob!

Next on the list of things to learn was how to figure out the amount of wool yardage to purchase for any given rug using a template Sandy had created.  I believe I have plenty of fabric for this first rug.

By the time I had filled in that chart and used the calculator for the math, it was 11:30.  Since I planned to leave at noon, rather than stay until 1 PM, which Sandy would have allowed, Sandy L got me finishing the braid for the center round, going around both corners and then adding the extra preparing for the butting.

When the center round was ready, the clock had just about run out  of time but there was one more thing Sandy L needed me to do:  figure out the placement of each “strand” of color for each braid.  She had a handy chart to fill out, so now, at home, I can actually get all the braids prepared before I go back.  If I get that done, I can go on to the next part of the instruction.  Because Megan is coming to visit with her family for the next two Wednesdays and the following week Bob and I are at the Temple, it will not be until the last Wednesday in September that I can go again.  I sincerely hope I can get a lot of the braiding done by then, BUT….with so much cleaning needed to prepare for company (Megan’s family plus Kate Shaffer and the spinning workshop in October)  I do not know how far I will get.

Because Guild is part of Newport, NH, and because Newport, NH is the home of Hodge Podge, a fabulous yarn, fiber, and spinning store,  I thought I would make a quick stop at Hodge Podge for some yarn for my newest pattern acquisition:  Sock Yarn Balloon Tying Creations by CID HANSCOM DESIGNS.

There are about ten of the cutest designs imaginable for “balloon tied” animals.  I showed the patterns to Eldon the other day.  He was favorably impressed with all of them so I thought rather than immediately give the pattern to Cynthia, I would use it first.  I have chosen to make the elephant, the bird, and the duck.

The elephant pattern calls for 2 colors:  Trekking XXL #1005 and Trekking XXL #314.  Hodge Podge does not carry Trekking yarn so I found a lovely gray and black named Licorice by Patons Stretch Socks yarn.  For the blanket part I got Regia 4-Fach Haltbar in Farbe: 01800 and Partie 43448.

The duck will be the same Regia 4-Fach Haltbar in greens, oranges, and yellows as well as some Reynolds Soft Sea sock yarn in color 0853, an orange for the bill and feet.

Mrs. Bird is going to be several blues and purples from Chirapa hand dyed merino spun in Peru.  The shade is 703.  The same orange for the beak as the duck and some Chirapa hand-dyed merino in a browns/black/oranges for the nest.