Today was a great day.  Got up just exactly 7 AM and one minute later received a phone call from my dear friend P about the day we had planned to work on her genealogy and various computer issues.  Since I was a slugabed it took a while for me to get going, get dressed, get breakfast for Bob and me, and get my stuff into the car. (Since I was not sure what precisely we were going to do I wanted to bring along my race knitting in case there was some down time.  There did not turn out to be this time.)

As I was racing through the upstairs to get something in our former bedroom, now the guest bedroom, I stepped down the long step into  the sewing room and squished my foot into something and slid several inches.  Miraculously I did not totally lose my balance.  I discovered that Max had left us a very very unpleasant present on the rug….which I picked up, included my Crock which I had fortuitously been wearing, and took the whole mess out onto the porch…finished packing the car and took off.

Many hours later when I arrived home I found that Bob, the angel, had taken care of the mess, including scrubbing my Crock.  He had also mowed the lawn and worked in the garage and worked at pruning more trees.  I made him a supper of spring mix greens and other salad plus sort of fresh sweet corn on the cob from Wing’s Market.  For dessert I made Greek-style yogurt with freshly-made strawberry jam using Mary B’s method with Clear Jel.  Sadly, it was nowhere nearly as good as Mary’s….perhaps pureeing the strawberries while they were still frozen was the problem?  Also the berries, having been picked at their perfect ripeness were already nicely sweet so the sugar I added made them sickeningly sweet for me, but Bob more or less enjoyed the glop.

After taking care of supper I retired to the upper regions, specifically the nice big fat leather easy chair…which I noticed for the first time has a rather “used” smell.  Well, it IS a used chair but I never noticed before…sort of like it has been sitting in a garage for seventeen years.  Oh well.  At least it is more or less comfy and the children can sit on the big arms for reading.  Hopefully I will get the chance on Wednesday when they come here while their mom and dad are having dental appointments.

Picking up the race knitting I went to town as best I could, despite being very tired.  I managed to get to round 44 of the 70 rows of feather and fan work.  I just started ball number three. I am concerned that I will run out of yarn before I run out of chart and bind-off.  Hopefully that will not happen.  I don’t have any other yarn in that color and don’t know if there is more in Grantham.

EPILOGUE:  I finished the afghan around 11 PM Saturday night.  When I went online to send a little email to Kim about it, she had already announced the winner who walked into the store prior to 5 PM.  Sad face here, but so glad to have done this.  I learned a lot of stuff….about knitting, and about priorities.  Some of my priorities were on the money, others were not…

Today finally arrived:  the day the Essential Knits (Grantham, NH) knitting race began.  The pattern was posted at 5 PM Eastern time to the emails of all the people who signed up.  I had been working on a couple of comfort dolls while Bob was doing other stuff (including hiking Holts’ Ledge  from the front to back and then back to the front again–7 miles!) and all of a sudden I remembered!  It was 6:15.  Due to computer/printer issues I had to use the upstairs computer to acquire and print the pattern.  Finally I started knitting around 6:30. It is 9:45 and I have finished the first page and got to the part where it references the “feather and fan” chart.  Uh-oh!  There is no chart.  I have just sent an email to Kim and hope to have the chart tomorrow.

Maybe I will take my computer with me, along with flash drive so I can help her by turning her file into a PDF file which she can then send out to all of us.  We shall see.  Tomorrow is campus ministers’ meeting and knitting with Elsie, plus I was planning to take the comforter to the laundromat to wash and dry in the big machines.  We shall see…. 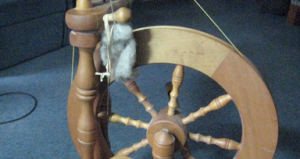 Many years ago Bob and I talked about raising sheep so we would have a mountain of lovely fiber to spin, something I have wanted to do since I was a little girl and read Rumpelstiltskin for the first time.  When I met Elsie McCarthy at Wing’s Market in East Thetford one day two years ago and she invited me to come knit with her on Thursdays, I had no idea the turn my fiber passage would take.

As we sat knitting with a group of very nice people we talked of many things.  When I said I was interested in spinning, she gave me a handmade drop spindle and showed me how to use it.  I was a terrible failure at using it.  I got out the drop spindle that Brother Bob Scotland had made for me many many years ago, along with a bag of fiber Sister Virginia Scotland had given me.  I was a terrible failure at that, too.  So, if the free stuff didn’t work, surely if I spent money, then I could do it.  Helloyarn.com seemed the perfect place, since I had visited a yarn shop in Massachusetts who recommended helloyarn…and I purchased a new drop spindle and a pound of merino fiber.  Still a failure.

Soon Elsie offered to loan me her Ashford Traveller spinning wheel, and her husband, Larry, put it immediately into the back seat of our Camry.  I was so thrilled with the wheel and the bags of fiber Elsie gave me to try my hand at spinning on a wheel.  It did not start off very well, but now, nearly a year later, I am beginning to spin more successfully…still not well, mind you, but better.